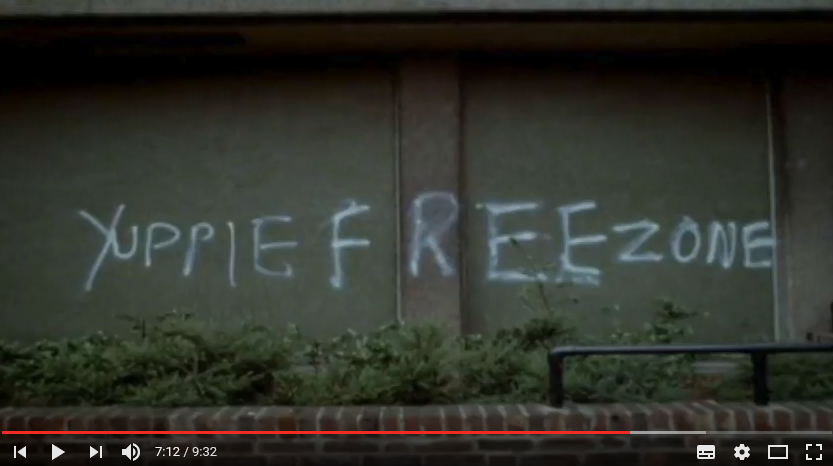 It’s been an absolute pleasure watching the videos QMUL IFP students made for their Tower Hamlets project.  Two videos in particular caught the eyes of our academic staff.  As was the case in 2015, groups who focussed on History produced strong work.  History Lecture Dr Jack McGowan said this of the video produced by Francesca, Khovar, Oshine, Natalia, and Klea:

I really like the more weighty substance of this video, which gives the impression of deeper and more imaginative research (compiling photos alone takes a lot of time).  All the contributors make a good impression here.  Interviewing the priest was a great idea, and I like the classy music and the Hollywood-style closing titles.

Dr Jill Fenton, one of our two Human Geography lecturers, chose “Gentrification in Tower Hamlets” (by Gheed, Linda, Esther, and Kieran) as the stand-out submission.  In Jill’s words:

The video which impressed me the most was ‘Gentrification in Tower Hamlets’. The interview with the café owner was very good, he clearly defined and illustrated gentrification. I am pleased the student interviewee bought one of the café’s cups of tea! I do wonder if this café owner/worker perceives himself as a hipster because he has the look and appears to be unashamed about gentrification as well as clearly informed about it. Well done students for finding this helpful interviewee.

I also liked the video ‘Isle of Dogs Trip’ because of the way the camera captured the architecture and types of building on the Isle of Dogs. Very enlightening that one of the students could take his group into the flat he occupies in Canary Wharf and talk about its worth! I guess he was also acknowledging that he is part of the gentrification!

I liked the Brick Lane videos, especially the one that delved into the history of the mosque and used this to describe the roots of multiculturalism in Tower Hamlet. However, by far my favourite video was ‘Gentrification in Tower Hamlets’.

It is clear that a lot of thought and effort went into this year’s Tower Hamlets videos.  We hope that you take the time to watch all of the videos, and enjoy them as we have.